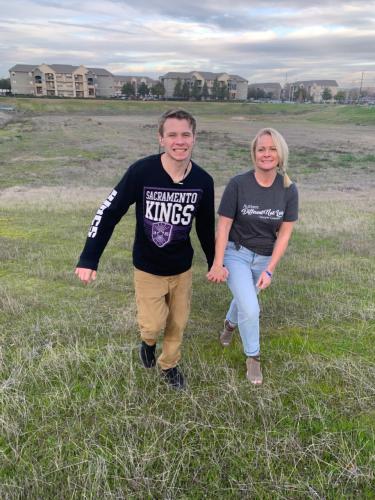 John and his mother, Vanessa, have together strived to impact the community through social and fitness programs and employment training with their organization, Fly Brave. John is a long-distance runner, and has non-verbal Autism. He was diagnosed at the age of 2 – when Vanessa was only 22. As a young single mother, she had to manage challenges (such as feelings of isolation and uncertainty) of having a child with special needs. Vanessa says she and John “grew up together,” because of her youthfulness and maturity levels when she had John. Now, they are both thriving adults making a difference in the lives of those with developmental disabilities through their organization.

During his adolescence, as John was managing the growing pains of puberty, Vanessa would take John on long walks after she got home from work to alleviate some of his anxiety and extra energy. One day in 2014, while on a walk, they saw the local running track at a high school was open. She took John to the track and he ran! He was impressively fast, and he immensely enjoyed running. That night, after his time on the track, John slept peacefully and woke up the next morning feeling very positive. His mother knew they had found the right hobby for John.

John’s hobby turned into a running career and it took off. Vanessa signed him up for the Sacramento County Chargers Special Olympics Track and Field Team and became a coach to help him get acclimated to being on a team. He wowed the community with his five-minute mile and his dream increased in size – literally! He ran half-marathons and twenty-mile races, each race moving towards the defining moment in his career where he ran the Boston Marathon in April 2019 in 3:52. His running career doesn’t stop there! John qualified for the 2021 Boston Marathon once again at the Revel Big Bear Marathon on November 9, 2019. He is currently training for his first Ultra Marathon: a fifty-mile trail race on April 4, 2020. He is running the Salmon Fall’s 50k (31 miles) on February 29, 2020 in preparation for the 50 miles ahead. John’s talent has brought him noticeable recognition and even a sponsorship with Total Nutrition NorCal.

When John turned 22 a few years ago, Vanessa was dealing with the questions that come with having a child with a developmental disability who is aging out of the educational system, like: “What will John do afterwards?” and “How will John make friends?” Vanessa knew John wanted to work, and she and John extensively searched the job market for opportunities. However, like so many others with developmental disabilities, businesses were less than enthusiastic to hire John. They claimed his nonverbal communication style would inhibit him from doing the job and were unwilling to assume his liability. John knew the value of hard work; he had mowed lawns in his neighborhood since he was 13 and enjoyed the manual labor. But, even with his working experience, Vanessa and John were faced with the question of “What do we do now?”

As a result, the Fly Brave Foundation was created in January 2016 in response to limited employment opportunities and social activities for the differently abled community, in continuing support for individuals aging out of the educational system.

The organization started with 5 families and has grown to nearly 300 over the last four years. Fly Brave has established a community-based employment training program (landscaping), a strong public speaking network of self-advocates, social skills workshops, numerous special events (proms, karaoke, Fashion Shows, Talent Show, Art Shows), a successful microbusiness (t-shirt shop), an online Etsy store, fitness programs, a police fitness collaboration which buddies up officers with individuals with developmental disabilities to learn about each other, art programs, and community integration through volunteerism. Their whole mission is to be as client driven as possible and currently they are finishing the process of becoming a vendor for Alta California Regional Center!

Fly Brave couldn’t have been possible without John. He is the reason Vanessa created their organization to respond to the systemic issues of employment and socialization for those with developmental disabilities. John’s journey into being a successful and thriving 25-year-old adult and the inspiration for Fly Brave was prompted through his love of running. To foster his passion and share it with others, the first program their organization started was an Autism Run Club. The program started with a handful of runners and has grown to 35 athletes and counting.

At Fly Brave, John has found a community. He helps set up all of the events and facilitates the programs with his peers. Because of Fly Brave, John has increased his verbal vocabulary, and can communicate to other persons through sign language. He has made a huge number of friends and has been in a loving relationship with his girlfriend, Drea, whom he met through Fly Brave.

John and Vanessa are very grateful for the support Alta California Regional Center offers them and are excited to finish the final steps to become an ACRC vendor. John considers our Executive Director, Phil, as his “best friend forever.” Vanessa said ACRC and Fly Brave may be different organizations but are all on the same team, providing programs and support for the community and our clients.