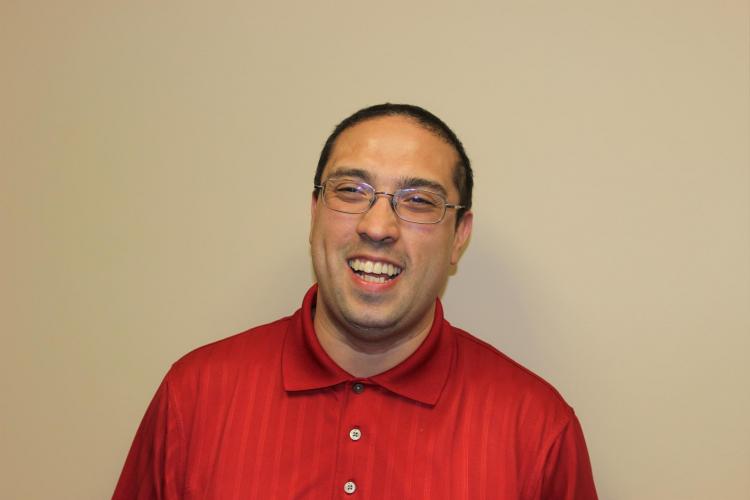 David Lopez is a charismatic individual who is well respected throughout Alta California Regional Center (ACRC). In addition to being a client of ACRC, he holds a position on the Executive Management Team (EMT) as the Client Advocate. David has served as a full-time employee for 22 years, recently celebrating his employee anniversary on January 2. The role of Client Advocate provides him the opportunity to work with and educate clients, Service Providers, and Service Coordinators on Client’s Rights and the functions of a Regional Center.

His journey to the Client Advocate position started in 1998, when ACRC began an initiative to employ clients. David was one of several who were hired to work part-time as Office Assistants. A year later, he was offered a full-time position in the Mail Room and worked there for about 6 years. In 2004, the position of Consumer Advocate (now called Client Advocate) was posted and David was approached by the Executive Director at the time, about applying for the position. He accepted the position, but it was not without its challenges.

There had been other Consumer Advocates, but never one who was a member of the Executive Management Team.  “Back then there wasn’t a step-by-step process to the [Client Advocate] position. I had to learn and figure it out as the days passed,” he said.

David learned from the individuals around him; clients, employees, and executive members alike. He tackled the duties of the role with ease, communicating with and educating Service Providers, employees, and clients. His success as a Client Advocate can be attributed to the immense support and encouragement he received from his coworkers, EMT members, and most especially, what he had learned from his family during his childhood and adolescence.

Throughout his life, David’s family never treated him like he was anything less than a human being; regarding his disability as a characteristic rather than his entire personhood. Despite his diagnosis of Cerebral Palsy, David wasn’t prevented from doing physical labor. During his adolescence, he worked with his mother in the summer as a custodial assistant. His mother told him, “I am not always going to be around, so you need to learn what to do in life.” David’s mother was both a teacher and a major support system during his upbringing. He later learned from his medical records, just how far his mother went to provide him a better way of life.

David had undergone multiple surgeries to gain the use of his legs, being prodded by his mother to keep pushing through the pain; she was determined for him to walk and constantly encouraged him. He was able to walk when he was 8 years old. Throughout his life, David witnessed the lack of support other individuals with disabilities experienced from their family and the outside community. This was in contrast to the encouragement he received from his family. They provided him with an immeasurable support system and he credits his mother for motivating him to walk. Because of his family’s enthusiastic motivation and witnessing his peers not receiving the same type of encouragement, he was inspired to be supportive to clients who might not have that in their lives.

David makes it a point to show the clients of ACRC that he has confidence in them and is there to support and empower them. “I look at clients as people first and their disabilities second,” is his fundamental way of thinking. David truly listens to what clients say so he can fully understand what their needs, thoughts and concerns are. He recognizes that as their Client Advocate, it isn’t his words that matter, but their own.

David has been happily married to his wife, Brenda, for 15 years. He feels grateful for Brenda because she looked past his disability and sees him as a person, despite his thinking that he would never be married. David credits a big part of his success at Alta California Regional Center because of his wife’s immense love and support. Brenda willingly made professional sacrifices to stay at home and raise their daughter and David’s stepson so he could pursue his career at ACRC. “If it wasn’t for my wife’s continued love and support I would not be where I am today in my career,” David said. He enjoys spending time with his family and reading in his free time. David is a big fan of Oakland (now Las Vegas) Raiders.