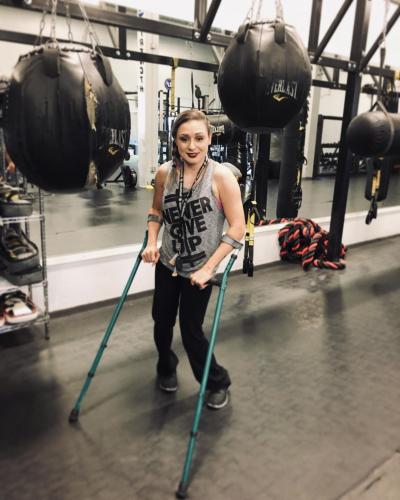 Stefania is resilient, tenacious, determined and positive. She is a light for her coworkers and family, and the epitome of inspiration. Her beaming, contagious smile is only the surface of her uplifting personality. Stefania is a go-getter; she exercises twice a week, holds two competitive employment positions, maintains a social life, and she believes she can do more and is constantly setting new goals. Her productivity isn’t hindered by her disability (Cerebral Palsy) and she doesn’t plan on slowing down.

Stefania exercises at Urijah Faber’s Ultimate Fitness gym, where she meets with her two personal fitness instructors, Nick and Russ. Nick is her personal trainer and strength coach. He explained his job is to help Stefania become physically stronger. Russ is Stefania’s physical therapist and has the experience in working with individuals with disabilities. Russ helps Stefania improve her range of motion and strengthen through new motion techniques. Russ and Nick consult together on what to work on with Stefania. The first part of a fitness routine is stretching and establishing some range of mobility in preparation for strengthening exercises. Nick typically assists Stefania is the initial steps of the routine.

The impact of Cerebral Palsy on Stefania’s body is that her back is hunched and her pectoral muscles and biceps are constantly activated with the daily use of crutches. The goal of her fitness routines is to work the antagonist muscles, and extend and strengthen her back, so she doesn’t end up in a wheelchair. In conjunction with the strength of her biceps and core muscles, a stronger back will be able to support her body.

What is astounding about Stefania is her commitment to the exercise regimen. Her instructors would ask if she needed a break, and she would persevere through the pain in the effort of reaching her goals. According to the U.S. Department of Health and Human Services, more than 80% of American do not meet aerobic and muscle strengthening guidelines. Only 23% of American adults are participating in regular exercise. Stefania, despite her disability, is part of the 23%, and she does it with a positive attitude!

Stefania, Russ and Nick communicate throughout the personal training sessions; checking in to see where Stefania is, mentally and physically. Stefania “never gives up” living true to the words on her shirt during her training session. In one of the closing exercises, Stefania and Russ work together to have her walk without crutches, all in the effort of using her back to walk instead of her crutches supporting her. Russ explained that it is more difficult to have her walk without crutches because of the opposing force her body isn’t accustomed to. Stefania stood, gained her balance, and step by step she walked to Russ, careful of her movements and mindful of the muscles she used to make the steps.

What is most impressive about Stefania is that she exercises in addition to her full work week. She works six days a week for Subaru Maita and Covered California, yet still makes time to exercise. Seeing the determination she had even with the added challenges of Cerebral Palsy, was inspiring.