Ben (also known as Seth) lives a well-rounded  life where he enjoys his work, his 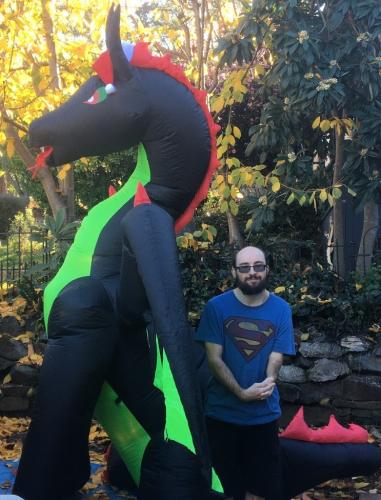 hobbies, and feels pride for his accomplishments. He wanted to live an independent  life and has achieved that with  education and persistence. In addition  to his professional life, Ben is somewhat an adrenaline  junkie and enjoys chasing the thrill rollercoasters provide.

For about 3 and a half years, Ben has held full-time employment providing janitorial
services at the Placer County Sheriff Station, also known as the Auburn Justice Center. He gained his job through PRIDE Industries and receives transportation services through Alta California  Regional Center. What Ben loves most about his job are the hours. He is a night owl, and so finding  work that would complement his waking hours was important for him – his work day doesn’t begin until 1:00pm. Ben is kind and a team-player. At work, Ben collaborates with a team of three people to split the janitorial services workload.

Before the start of his professional career, Ben attended TAFT college in the Transition to Independent Living Program and graduated in 2018. Ben attributes the skills and knowledge he has on living independently  to his time at TAFT. He loved his classes, and especially took to Banking, which taught him how to pay bills, budget, and utilize financial systems like debit cards.

In his free time, Ben enjoys going to amusement parks and considers himself a roller
coaster fanatic. He loves Six Flags Magic Mountain in Southern California  where his
favorite rollercoaster is the X2. A season passholder, Ben tries to go Six Flags a few
times a year. His goal is to attend amusement parks in other states. Besides chasing
thrills, Ben plays video games and enjoys racing games like Forza.

Ben is pleased with his life. He feels proud that he went to college, enjoys living by
himself, and he cooks his meals. His family echoes his pride and commends him for his accomplishments.