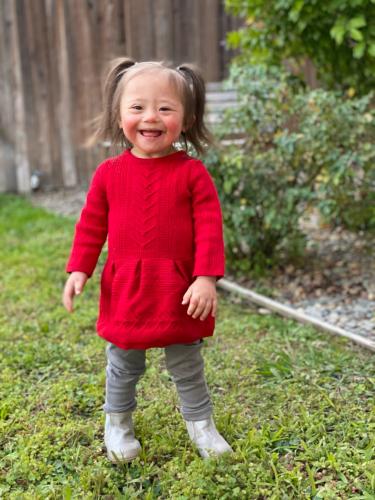 Being a parent always brings a sense of joy, and for Kristal it brought double when she learned she was pregnant with twins! However, it wasn’t until she gave birth to her premature girls, Ariel and Katalina, that she learned that Ariel has Down Syndrome. Kristal’s labor was a tumultuous experience, so when she was told about Ariel’s disability, she had to cope with the difficulties that lay ahead. Despite the complications of having a child with Down Syndrome, what they gained was a new world filled with possibilities.

After the birth of the twins, Kristal was connected with a mother who was a strong advocate for those with Down Syndrome and became friends with her. Their friendship provided some much appreciated help in navigating the decisions of having a child with a disability, such as weighing the decisions of the present and considering Ariel’s future. What would Ariel do? Where would she work? Her new friend connected her with an opportunity to begin Ariel in modeling and what budded from that was an outlet of representation and inspiration.

Ariel began modeling for major brands and being featured in children’s shopping catalogs. She effortlessly adapted to the modeling world and her love for modeling bloomed in her smile and charismatic personality. Even at two years old, Ariel’s work ethic is impeccable! She recently had open-heart surgery and recovered quickly, going back to modeling just two weeks after! Ariel has modeled for big box brands like Walmart and has had many opportunities come her way as the culture in the modeling industry has changed to featuring a more diverse population and being inclusive.

With therapy, Ariel has been able to flourish and grow. Kristal believes that having her sister, Katalina, has also greatly contributed to Ariel’s developmental improvements because she wants to keep up with what Katalina is doing. From playing to walking, Ariel has no intention of slowing down and it is evident through her infectious personality and winning smile.

Kristal feels grateful for the opportunities they have had. Ariel’s modeling has allowed them to represent a population that was underrepresented and gives hope to children seeing a model who looks like them. Kristal has received multiple messages on their Instagram account (the_amazing_ariel_h) seeking advice and words of encouragement and it really has rewarded them with an extended community and family. As Ariel ages, Kristal can take comfort in the fact that her daughter can succeed in life following her passions and doing what makes her happy.